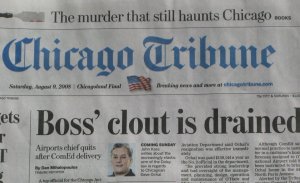 The boss in the Chicago Tribune‘s Saturday headline was singular. Thus we were looking for a singular possessive form of “boss” not the plural possessive form. Or was Zell channeling Col. Robert McCormick and taking up the cause of simplified spelling The Colonel’s “brite,” “lite,” and “M’Cormik” stirred up the spelling pot and caused a fuss in the press and in schools. Perhaps moving to simplify spelling is better than war-mongering, or red-baiting.

An English college professor suggests that we abandon standard spelling and allow “varient” spellings in the face of abysmal “orthografi.”

Fed up with his students’ complete inability to spell common English correctly, a British academic has suggested it may be time to accept “variant spellings” as legitimate.

Rather than grammarians getting in a huff about “argument” being spelled “arguement” or “opportunity” as “opertunity,” why not accept anything that’s phonetically (fonetickly anyone?) correct as long as it can be understood?

“University teachers should simply accept as variant spelling those words our students most commonly misspell.”

To kickstart his proposal, Smith suggested 10 common misspellings that should immediately be accepted into the pantheon of variants, including “ignor,” “occured,” “thier,” “truely,” “speach” and “twelth” (it should be “twelfth”).